Ethiopian Single Origin Coffee and the Legend of Jumping Goats!

Around 850 AD, there was an Ethiopian goat herder named Kaldi or Khalid. He noticed that his goats were jumping and very energetic after chewing on the red berries of a particular bush. After eating some berries himself, he discovered a boost in energy. Excited about his discovery, he presented the berries to an Islamic monk in a nearby monastery. The monk disapproved of using berries for their energy-boosting effects and threw them into a fire wherein a delightful aroma ensued. Quickly, the roasted beans were gathered from the coals, ground up, and added to hot water, as a result of this producing the world’s first cup of coffee! There are many versions of this legend. Another one says that the monk spent more time in evening prayer because the berries kept him awake at night. He shared the berries with other monks, and the popularity of the energizing berries grew from there.

The story, probably not true, originated from a Roman professor, Antoine Faustus Nairon, in the 1600s. This story is the most popular coffee origin story in Western literature. Today, names like “Dancing Goat” and “Kaldi’s Coffee” are common for coffee shops and roasting companies worldwide. With the largest coffee chain “Kaldi’s,” being in Ethiopia.

It is said that Ethiopia’s ancient coffee forests are the origin for ALL coffee grown worldwide. Scientific methods are able to trace the origin of these plants back to Ethiopia. 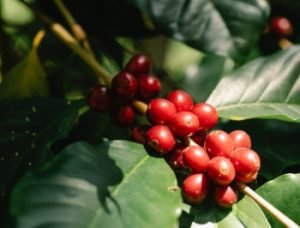 Ethiopia is the home of the Arabica; originally a forest plant restricted to the highlands and today the most prominent cultivar in the world. Sixty percent of the world’s coffee production is from Arabica, with the remaining forty percent being Robusto. Coffee berries grow on shrubs and do not get harvested for the first three years of growth. A shrub can last 15 to 20 years before needing to be replanted. When the berries turn red, they are ready to pick! Coffee from Ethiopia is wet-processed which uses water to move the coffee berries and extract the seeds. With its high altitudes, Ethiopia has three predominant growing regions, Sidamo, Harra, and Kaffa. The vegetation is lush, and the soil is deep, making it perfect for growing coffee. These beans are characterized by their flavor clarity, showcasing bright, complex notes.

A cup of Ethiopian coffee makes a remarkable and bold statement: full-flavored, a bit down-to-earth, and full-bodied. 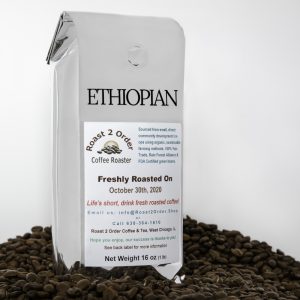 The top-selling single origin roast at Roast2Order.shop is Ethiopian. Ethiopian is a medium roast that gives the best coffee taste with a great pick me up any time of day! Full-bodied yet smooth finish. Never bitter, and every sip is satisfying! Try a bag today!